The Eye of the Bluebird • September 3, 2021 • https://kenwoodnews.org/2328/news/schools-dismiss-early-wednesday-for-tornado-producing-storms/ 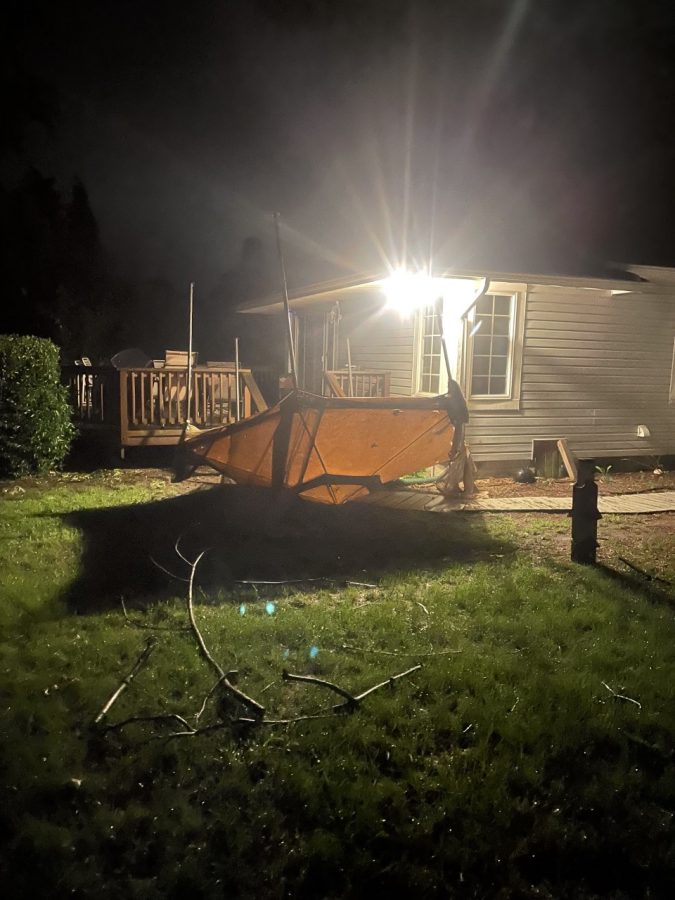 The winds and storm at Ms. Littlejohn's house put a hole in her roof.

On Wednesday, September 1, 2021 Baltimore County Public’s Schools were released for a three hour early dismissal for the possibility of severe weather. Walkers, bus riders, and those who rode in cars made their way home from the school. At the time the weather didn’t look too threatening with a drop of rain not even falling from the sky yet.

Students and staff were both excited and a little nervous about the extra time off from school. With it being the first full five day week of school in over a year, it was a nice chance for everyone to pause in the middle of the week but because of what the storm potentially involved for them in their specific home areas some were nervous for the free afternoon.

It wasn’t long after school dismissed that the rain began. Not many people were affected, but the same can’t be said for all. Local meteorologist Justin Berk confirms on his weather page, JustInWeather that at least two tornados that the weather service knows of currently did touch down in the Maryland area, with one hitting “from Edgewater to Annapolis and another in Edgemere.” The one that touched down near Annapolis was an EF-2 and the one in Edgemere an EF-0.

Ms. Littlejohn who didn’t think the storm was too bad where she was babysitting her parents’ dog though got a shock from her husband at home when she learned the storm was pretty intense at their house in Pasadena. “My husband said it was about 15 minutes of really loud wind, he said he could hear all our porch furniture sliding around in the wind, and then there was a really loud banging on the roof when a branch came down and put a hole in the roof!”

Ms. Leaf lives in Fort Howard which is on a peninsula across from where the tornado hit in Anne Arundel. She rushed home to tie down anything that could blow away. She shares, “We’ve been actively working on flood situations with our property to minimize water coming into the house. The winds from this storm were very strong as the storm passed through.  Thank goodness damage was at a minimum.  Our yard flooded with water due to the massive amount of rain fall in such a short period of time and we had a few downed tree branches.”

Luckily all of Kenwood staff and students made it through the storm without much or any trouble and safely returned to school the next day. After seeing the damage to our neighbors a little further away in Edgemere and Annapolis though we’ll be sure to take those future tornado warnings seriously.