Who Are the Wanted or Unwanted Guest of Summer 2021: The Cicadas 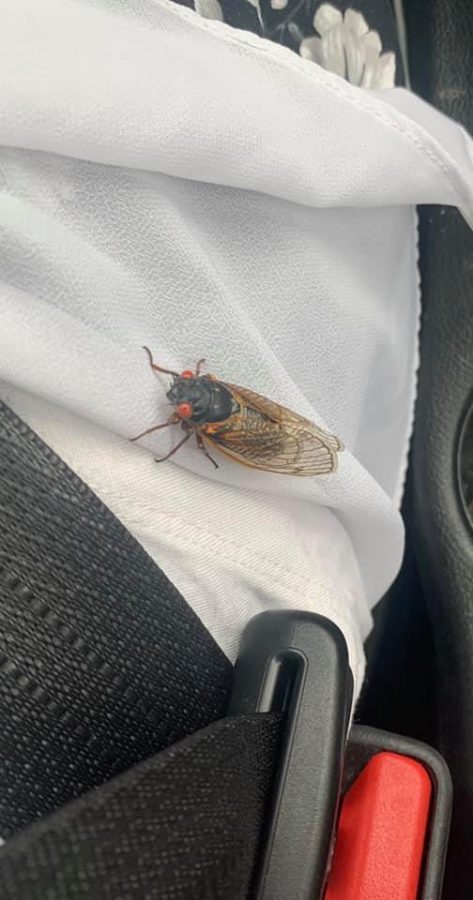 A cicada joined a Kenwood teacher for her drive into Kenwood one morning.

They’re back! The pesty, big winged, fly into everything little demons are here and they are making themselves heard. Cicadas are very well known here in Maryland. They are literally everywhere; you simply cannot miss them. They stick to almost anything. Trees, houses, cars, the ground, and even you. But no matter how many times we’ve heard about the cicadas coming back we never really go into depths about why they only come around every 17 years or really much about them in general besides the warning that they were coming!

Not only can Cicadas see perfectly fine, but they also have five eyes! According to Cicada Mania, the website dedicated to answering all your cicada questions, cicadas have, “Two large compound eyes, which are used to visually perceive the world around them, and three small, jewel-like, simple eyes called ocelli.”

The sound of cicadas is the thing most think of when they think about cicadas. They make that what some would call an “annoying sound” by contracting their tymbal muscle that is attached to the membrane, causing it to bend and make that clicking noise (Matthias).

One thing that almost all bugs have in common is that they either sting or bite or both. With cicadas we don’t hear people complaining about stings or bites like we hear with some insects. It’s very common for people to go out and catch cicadas as some are quite fascinated by their appearance. “They do not sting, but I believe that they may be able to bite. They have a plant-based diet, so I don’t believe they would actively try to bite other animals. My children handle them frequently and they have never complained.” shares Ms. Williams.

The most well known fact everyone can recall about cicadas is that they come around every 17 years. But why is that? It’s a part of their life cycle. The cicadas that have already emerged mate with other cicadas and then they lay their eggs. Cicadas only stay above ground for 4-6 weeks. After they lay their eggs, they die off. The eggs though are laid underground where they spend the first 17 years of their lives before they once again emerge to mate and create the next generation of cicadas (Matthias).

“I do not know the average adult life cycle of a cicada,” adds Ms. Williams, “But they tend to stay above ground for a large portion of the summer if I remember correctly from their last emergence.” If you’re not a fan, it sounds like they’ll be the unwanted guest for the duration of this summer.

Matthias, Meg. “Why Do Some Cicadas Appear Only Every 17 Years.” Brittannica. Encyclopedia Brittannica. 2021. Web. https://www.britannica.com/story/why-do-some-cicadas-appear-only-every-17-years