The Eye of the Bluebird • November 5, 2020 • https://kenwoodnews.org/1809/features/kenwood-club-to-support-the-lgbtq-community/ 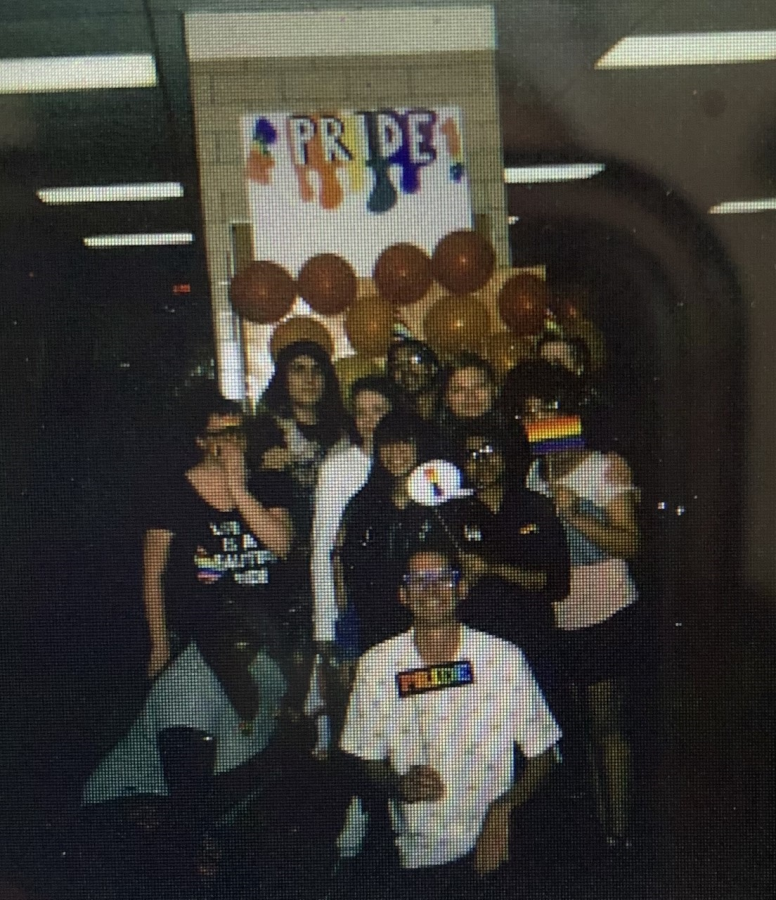 Mr. Erdman and students showing their love and support for the LGBTQ community.

The LGBTQ community faces many challenges everyday. Feelings of constantly being judged and not accepted can be a tough battle to go through at a young age. LGBTQ stands for Lesbian, Gay, Bisexual, Transgender, Queer. In today’s generation, it may be accepted more than it had been in the 90s.
Kenwood High School teacher Ms.Villaran is a apart of the LGBTQ community. One of the main challenges she had faced was being accepted by her family and loved ones. She’s happy to see organizations in schools today that support LGBTQ students. ““When I was in High School, LGBT+ culture was not as prevalent in society and not accepted as much as it is in today’s world,” Villaran shares.

There was a time where being a LGBTQ member was a crime, and you could get a life penalty for loving who you love. Ms. Villaran waited until college to come out because she did not feel comfortable coming out while under her parents’ roof.

Unfortunately, sadly, many hate crimes to this day are still being committed against people loving someone of the same sex or being transgender. On June 13, 2016, a popular gay dance club in Orlando was the site of a mass shooting that left 49 dead and another 50 injured. This hate crime is being called the worst mass shooting in U.S. history (Tsukayama).

Just now in the year 2020 in June, the Supreme Court “further advanced the cause of LGBTQ rights Monday, ruling that a landmark civil rights law barring sex discrimination in the workplace applies to gay, lesbian and transgender workers” (Wolf). At the time of the ruling USA Today reported, “Twenty-eight states have little or no workplace protections for the LGBT community. About 4.5% of the U.S. population, or roughly 11 million people, identify as lesbian, gay, bisexual, transgender or queer; 88% of them are employed.” (Wolf).

It has been a process over decades to even reach this point for the LGBTQ community. “The Supreme Court’s clarification that it’s unlawful to fire people because they’re LGBTQ is the result of decades of advocates fighting for our rights,” exclaimed James Esseks of the American Civil Liberties Union, which represented Zarda and Stephens. “The court has caught up to the majority of our country, which already knows that discriminating against LGBTQ people is both unfair and against the law” (Wolf).

Coming out as LGBTQ in the 90s or before was not normalized as much as it is in today’s generation, but there is still ground in equality to be made for the rights of the LGBTQ community. To offer a safe space of belonging for LGBTQ students, Kenwood has a club run by Mr. Erdman. Mr. Erdman has been running the club for three years but the club was ran by Ms. Jannotti before he took it over in the beginning of 2018. Back when school was in session, there were about 30 students that were a part of the club, but now in our online set up there are 44 online members, including staff and allies.

The online start to the school year has made it a bit more challenging to check in emotionally with students. “It’s hard to have heavy conversations because you can’t tell whether a student is going through something and needs to talk. It’s hard to tell if a kid’s okay,” Mr. Erdman shares. He’s created an online space that can be more anonymous for students to visit if and when they need someone to talk to. “It’s trickier with this whole online thing because but I still want to show them I care and give them a space to talk about things. Students in the club online remain anonymous unless they choose to comment on something. We haven’t had a synchronous meeting yet, but they have suggested they’re open to it in our Google form and they know how to reach me independently.”

Though there are several other teachers besides Ms. Villaran and Mr. Erdman that are a part of the LGBTQ community, other teachers and staff along with them have genuine hearts in wanting to support LGBTQ students in feeling safe in who they are and in their home community.