The Eye of the Bluebird • October 8, 2020 • https://kenwoodnews.org/1724/news/kenwood-takes-action-to-register-voters/ 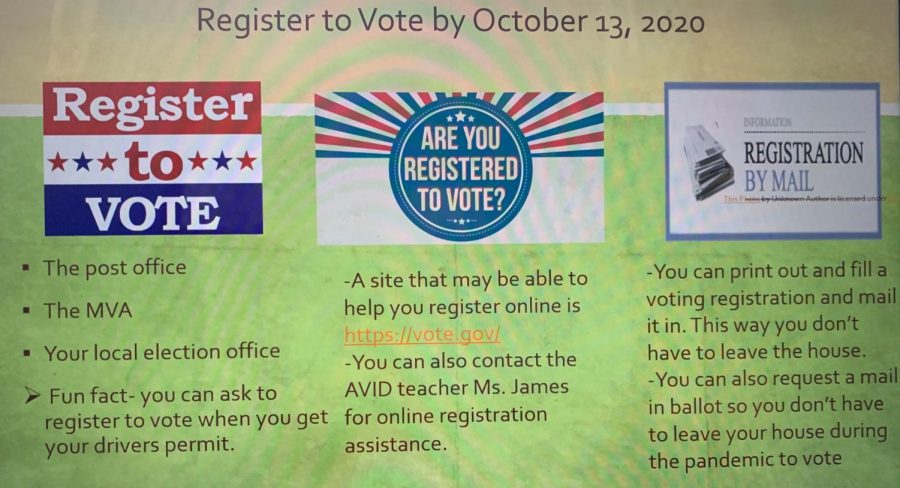 Deadline to register to vote is Tuesday Oct 13! Have your voice heard this election!

This year’s presidential election is coming up and COVID is making it harder for citizens to cast their vote, but COVID or not Kenwood AVID teacher Ms. James is helping as many seniors as possible to vote in this year’s election by helping them register to vote.

Kenwood 2020 grad Antonio Robinson also approached Kenwood teacher Mr. Woodward about what he could do about getting the unregistered members of his church registered to vote in this year’s election. Antonio Robinson, who graduated in June and is studying Environmental Science at Towson University, is very involved with his church in Baltimore City and was concerned at the number of people within his church and church community that were not registered to vote. “He reached out to me to see what he could do. I let him know that I was a Voter Registration Volunteer and that I could train him to be a Voter Registration Volunteer. Then he could not only help folks register to vote, but he could also train others in his church to be Voter Registration Volunteers. I met with him last week and his intent was to quickly train some others in his church and then get out this past weekend and next weekend to canvas the area for those that were not yet registered to vote,” shared Mr. Woodward.

It’s known that young people don’t vote a lot, but it isn’t because they don’t want to. It’s a combination of reasons like confusing voting registration rules, polling places getting moved, and feeling uneducated in civics has made it harder for younger citizens to vote.

Ms. James is helping to close that gap between young and old voters by helping senior students register to vote so their voice is also heard during this election. “Our main goal as teachers is to use our platforms and subject matter to help students become critical thinkers,” shares Ms. James.

It all started when Ms. James found out seven of her students could vote so she took time to get them registered. She also thinks it’s beneficial for the government to see younger people vote. “Unfortunately, until this age group consistently votes in masses, the needs of this group will be ignored by politicians. The reason why all legislation is skewed toward helping older Americans is because they always vote.”

The deadline to register to vote is October 13 so if you’re eligible to vote it would be a great idea to do so. Journalism students recently created visual and video ads to share with the community to inform them how and why to register to vote. If you’re still unsure how to go about registering to vote check out their ads or reach out to Ms. James or Mr. Woodward. Voting is how as citizens we make our voices heard.