The Eye of the Bluebird • February 17, 2020 • https://kenwoodnews.org/1420/sports/kenwoods-new-wrestling-mats-spark-a-dominating-season-on-the-mats/

Kenwood Bluebird wrestling team, coached by Will Richter, Officer Cooper, and Ron Wagner, added a new member to their team this year: a brand new wrestling mat. The mat is black and blue based with a designed bird nest and feathers. The new mat was unveiled on December 19 at the Bluebirds’ home match against Perry Hall. 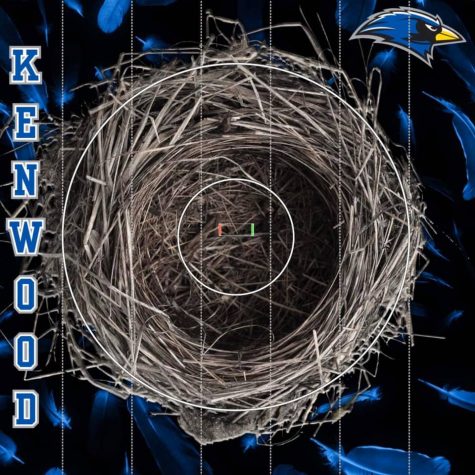 Coach Richter believed that it was time to get a new mat. He came up with the idea between the 2018-2019 wrestling season “After a few years of loaning out the mat, it was getting damaged,” Coach Richter states. The mat design was chosen to represent Kenwood’s wrestling team as the Bluebirds of the nest.

The Bluebirds raised the money for the mat by transferring funds from the Best of the Nest tournament, restaurant fundraisers, clothing drives, and sent out letters to local companies, “I sent out the first wave of donation letters mid December 2018,” Richter shared. The original thought was that it would take two years to raise the money but a little over six months later they had raised $12,647.88.

The Bluebird wrestlers are very fond of the mats. The mats are unique and creative looking, representing Bluebird pride.  Jalen DeMauri thinks the mats are “the best mats in BCPS”. The design of the mat is very clever as it represents the Bluebirds being in the bird’s nest. The new mat is also east to set up, “It doesn’t take long to set up the new mat up at all,” shared junior Kaylon Duncan.

The Bluebirds wrestlers give thanks to everyone who donated so that they have the new unique mat. “I’m thankful for everyone that donated money. It shows how much people are recognizing the wrestling team,” senior Daylon Duncan exclaimed, excited the money was raised in time for him to enjoy the new mat his senior year.

The new mats have brought good luck to this year’s team as they finished the dual season with a 13-1 record! They defeated Edgewood 42-34 in the Regional Semis before losing to C. Milton Wright in the finals. Even with a tough lose in the Regional finals it’s been a great season. Like any sports team, wrestling is like a family. “It’s like a big family. We have our fights and our arguments, but we work it out in the end. Every single one of us is there for each other no matter what.” Jalen DeMauri exclaimed. The Bluebirds Wrestling team won most of their matches this year, they have a great team, a unique mat, and an amazing worth ethic.

Several of our JV wrestlers also had a great season! The following JV wrestlers placed at the County Championships: 2nd Place at 195 – Trevor Campbell and 3rd Place at 285-Kalil Bailey-Bey-Holmes!

To wrap up the season wrestlers will now enter their individual competition phase with County Championships at New Town on February 21 and 22.  From there they can individually advance to  Regionals at Paint Branch February 28 and 29.  States will conclude the season on February 29 and March 1. Last year Daylon Duncan and Jalen Demauri both qualified for States and the team is hopeful to see them as contenders again this season!